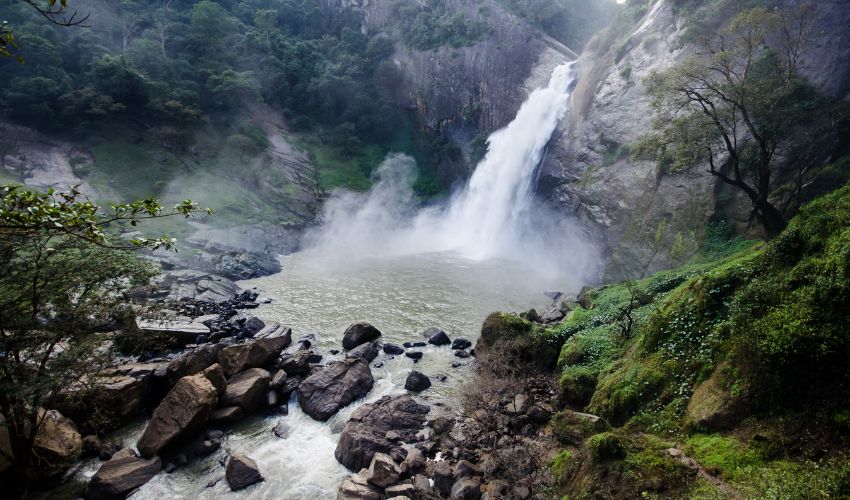 The Dunhinda Falls are the most amazing tourist attraction in the Badulla city, and they are one of the most stunning cascades in all of Sri Lanka. They are set in a natural environment that is breathtakingly beautiful. If you like the variety of Sri Lankan landscapes, paying a visit to Dunhinda Waterfall in Sri Lanka is highly recommended during your time in the country. Here, you can take in the beauty of a waterfall, take in the vistas of the surrounding forest, and even do a little bit of trekking for yourself. The falls were formed by the Badulu Oya River, and they got their name from the fact that they resembled the pupil of a person’s eye. The word “Dunhinda” literally translates to “to vapor” in the Sinhalese language, and as a result, it also refers to the torrential downpour.

Attractions for Visitors to the Dunhinda Waterfall Area

The Dunhinda Waterfalls are comprised of a magnificent smoky cascade that is 63 meters in height and pass through a narrow gap between craggy rocks before eventually crashing into a large basin at the base of the falls. They are reached by traveling down a hillside that is covered in lush vegetation. The entire property is located in a breathtaking natural setting that is home to a wide variety of flora and wildlife, including butterflies, monkeys, birds, and beautiful shrubs and plants. Along the path, there is also a smaller waterfall that has a far wider breadth. You will be able to appreciate the beauty of the waterfall more fully thanks to a recently built stage and a bridge that hangs over it.

The Lore Around The Dunhinda Waterfall.

Several of Sri Lanka’s myths and tales make reference to the waterfalls and the surrounding area. It is stated that indigenous inhabitants of the nation who belonged to the Vedda tribe used to call this place home at one time. During the time of King Rajasinhe, a large fern became lodged at the top of the fall, which caused the town of Badulla to become submerged in water. The monarch charged one of his subjects with the responsibility of removing the obstruction off the path. They spent a total of three months cleaning the water and restoring order in the town before they were successful. According to the traditions that date back to the 14th century, Princess Mampitiya Anuhas Menike Bandara, who was the daughter of the monarch of Gampola, ran away with her lover and then had to commit suicide by drowning in the basin of the waterfalls in order to avoid her father’s anger.

When Is The Best Time To Visit Dunhinda Waterfall In Badulla, Sri Lanka?

The months of June and July are the ideal time of the year to view surrounding Dunhinda Falls since the Badulla region, which is where the falls are located, seems more pleasant with bright weather throughout the daytime. However, a visit to the falls is well worth your time at any time of the year. It is necessary due to the fact that your trip to Dunhinda Falls will involve not only driving but also some trekking and walking. If you don’t mind the rain, the best time to see the falls is from November through March. During those months, the volume of water flowing over the falls is at its highest, making them look particularly majestic.

How Can One Get To The Dunhinda Falls Area In Badulla?

The Dunhinda Waterfall in Badulla may be found around 25 kilometers away from Ella, the most important tourist destination in the surrounding area. If you take a vehicle or cab from Ella, the trip to the falls will take you less than an hour. You have two options for getting about the city of Badulla: either hire a tuk-tuk or ride one of the municipal buses, which come around every half an hour. You will need to walk around 1.5 kilometers in order to reach the waterfalls from the entrance gate. Along the way, you will see various vendors selling food and beverages. You will get a taste of trekking with the muddy track that you will go.

The Most Comprehensive Guide To DALAWELLA BEACH In Sri Lanka

The Whole And Comprehensive Guide To RAVANA FALLS In Sri Lanka

With 14 Waterfalls, This Is The Ultimate Guide To The Best Waterfalls In Sri Lanka!

No comments to show.