There are more than 400 waterfalls spread across the entire island of Sri Lanka, each of which is beautiful and worth visiting. The majority of them are located in the mountainous interior of Sri Lanka, particularly in the region that is in-between the districts of Kandy and Nuwara Eliya. While we were in Nuwara Eliya for a few days, we made it a point to check out a few of the region’s most breathtaking waterfalls.

The Aberdeen Falls are most certainly considered to be one of them! Fans of waterfalls and the great outdoors should not miss this one because it is approximately 98 meters high and offers a wonderful, short journey through the jungle. The waterfall known as Aberdeen Falls was one of our favorites to visit while we were in Sri Lanka. Before you travel to the Aberdeen Falls in Sri Lanka, read the information that is provided in this blog post. It will provide you with all of the details that you require.

How To Travel To Aberdeen Falls Sri Lanka.

Having your own transportation or hiring a private driver is the most convenient way to travel to the Aberdeen Falls. It is important to remember that the weather in Nuwara Eliya is notoriously difficult to predict. Because you are in the mountains, there will be rapid shifts in both the temperature and the weather. We discovered a very nice alternative to rent a car from a local for the price of $30 per day, which provided us with the ability to tour the entire region surrounding Nuwara Eliya.

This was the greatest choice for us because we didn’t want to take the chance of driving a motorcycle while it was raining and getting wet. You may find your way to the location where the waterfall begins by using Google Maps. However, you must ensure that you drive all the way to the end of the street where Google Maps directs you to go. You will see a sign along the road earlier that has a picture of a waterfall on it; however, you should not take this route! You have to travel all the way to the end of this road before you will find a parking spot and a shack in the vicinity.

In addition, if the weather is nice, you should be able to see the Aberdeen Falls from the road. That is your indication that you are getting close to the place when the hike will begin.

The Climb To Aberdeen Falls.

After you have finished exploring the waterfall, you will come back to the parking lot and find a local shack there. At this shack, you will be able to purchase a fruit juice or a cup of tea. Since there is no charge to enter the waterfall area, you can begin your descent to the Aberdeen Falls as soon as you have parked your vehicle because there is no need to pay an entrance fee. The trail is relatively uncomplicated and should take no more than twenty minutes to cover the short distance. On your way to the Falls, you will go by a few homes in the neighborhood.

Flip-flops are not appropriate footwear for this hike in any way, shape, or form. For a number of different reasons! Because there are many rocks that are easy to slide on, you should wear shoes that have good grip. In addition to that, there are leeches all around the region. Particularly when it has been raining all day! Even though we were wearing socks and long pants, they nevertheless managed to get on our ankles and gorge themselves on blood, despite the fact that we were protecting them with socks and pants. When a leech has attached to your skin, you should read the instructions that are provided in the next paragraph.

The months of September through December are considered to be the ideal time to visit Aberdeen Falls. Because these are the months with the highest average rainfall in the region, it is during these months that the waterfalls seem their most majestic. However, it is still possible to go to Aberdeen Falls throughout the other months of the year. The force of the waterfall is solely determined by the season; nevertheless, even during the winter months, water can still be seen rushing over Aberdeen Falls, even though the volume is likely to be somewhat lower.

What To Anticipate When You Visit The Aberdeen Falls In Sri Lanka.

The amount of water that is falling over the Aberdeen waterfall and its overall strength might change depending on the time of year. We visited there in September, and during our whole stay, it rained for at least some portion of each day. The end effect was a breathtakingly dramatic environment complete with a roaring waterfall.

The plunge pool at the base of the waterfall is not a safe place for swimming or bathing in my opinion. The force that the water flows down with is tremendous, and it’s possible that the rocks are slippery. Before you decide to go swimming in this waterfall pool, employ some common sense. Perhaps the rules are different during the dry season, when the waterfall is less powerful.

The Aberdeen Falls Are Home To Some Leeches.

It is important to keep in mind that the rainforest in Sri Lanka is home to a large number of leeches. Especially in locations where there is a high level of humidity or after it has recently rained. You should get used to the idea of wearing socks with a legging that is really snug. However, if you do find a leech connected to your skin, you should not pull it off because the mouth pieces might remain under your skin even after the leech is removed. Just keep in mind that leeches aren’t dangerous in any way, and they don’t spread disease, so there’s no need to freak out if you come across one. In most cases, leeches can be removed without much difficulty and will not result in any lasting damage.

The most effective method for removing a leech is to take something flat, such as a credit card for instance, and slide it beneath the leech to break the seal. Once the seal is broken, the leech will release its small jaws and leave the host. When it comes to getting rid of a leech, residents in Sri Lanka and internet sources also provide additional removal methods. For example, you could use salt, alcohol, DEET, or lemon juice to get rid of the leech so it will fall off on its own. However, due to the fact that the leech will swiftly separate from the host, this is not the best or safest alternative. Due to the fact that it is in such a rush, it will most likely spill some of the contents of its stomach into the incision. Because of this, there is a greater possibility that the wound will become infected.

The Climate Of Nuwara Eliya.

In comparison to the rest of Sri Lanka, the weather in Nuwara Eliya is typically quite chilly, and there is a greater likelihood of precipitation here. This is also the reason why there are a great number of waterfalls in this region, in addition to the stunning tea farms, which contribute to the area’s vibrant green color.

October through December are the months with the most precipitation. The months of March through May are considered to be peak travel months, which results in increased prices. 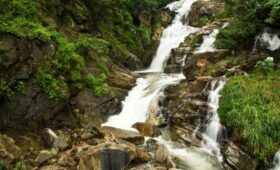 The Whole And Comprehensive Guide To RAVANA FALLS In Sri Lanka 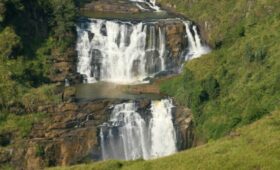 The Definitive Guide To The 12 Best Waterfalls In The Nuwara Eliya Region. 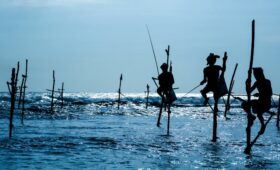 The Most Comprehensive Guide To DALAWELLA BEACH In Sri Lanka

No comments to show.